(Asheville Citizen-Times)  The city should overhaul the police department before hiring a new chief, according to a group that represents officers across the state. The North Carolina Police Benevolent Association also wants input on hiring a replacement for outgoing Chief William Anderson, its executive director, John Midgette, said Saturday. Mayor Esther Manheimer on Saturday said City Manager Gary Jackson would appoint an interim chief and start the process of finding a new chief. The city has said it will search nationally. Anderson, 58, announced his Dec. 31 retirement Friday after weeks of turmoil. His decision comes as state regulators conduct a preliminary inquiry into standards at the department.  His decision to leave came about a month after a quarter of the city’s officers signed a petition saying they had no confidence in the department’s leaders. A Citizen-Times investigation into the department found allegations of on-the-job retaliation, an increase in officer resignations and administrative errors that led to officers using expired radar guns. Hundreds of traffic cases have been dismissed.

I have wings that have sprung free. Come fly with me.

Hop up on Matt’s “Front Porch”, Chill and Chat

Thanks to Matt Evans of The Catawba Angler for spending a full hour with us on the show today, talking #fishing in WNC. The podcast is up on most platforms tonight. The rest tomorrow. #mcdowellcounty #LakeJames #fishing #flyfishing #linvillegorge #thecatawbaangler #trout
Another absolutely AMAZING #sliceoflife #comedy show at #theorangepeel in #asheville tonight, featuring nothing but local comics! So much fun!! #avlcomedy #michelescheveproducer
Getting ready for tonights big Slice of Life #Comedy Show, on The Orange Peel's main stage, featuring a dozen of the sexiest local #comics in #Asheville. ;) Doors open at 7. Show at 8.
Rainy, winter weather always looks to pretty to me - at Lake Tomohawk in Black Mountain. :)
Family fun night (Saturday) at @ashevilleretrocade in #westasheville
Family fun!
Got to enjoy the unseasonably warm day out on my canoe today. Full gallery, and other cool outdoor stuff over on @mattmicheleoutdoors
Just a little screen grab from "Camera 3" in our new studio. Can't wait to start broadcasting @bizradioavl local shows with @ashevillechannel too! #Asheville #radio #tv #business #community
Marty Reed with #capitalbankcard of #Asheville is a total pro! During her recent interview in our new TV/Radio studio, she wasn't phased one bit by all the camera's and equipment! That's the kind of cool you want working with your credit card processing needs. #bizradioasheville
Thanks to all the great entrepreneurs that came out to our New Year's Broken Resolutions Carb Party at Farm Burger in South Asheville this week! We had so much fun, SO much incredible food and I have to admit, we felt pretty special that Farm Burger took such amazing care of us - even shutting down the restaurant for the night so that Biz Radio Asheville guests had it all to ourselves! #community #matters #Asheville #business #farmburger #southasheville
Earl Hunter, Founder of "Black Folks Camp Too" made his radio debut with us, on "Matt & Michele Outdoors" recently - for this endeavor anyway - and he couldn't have been any more passionate or excited than he was. It was infectious to hear his story and his cause. Check out the Podcast of our 01-03-2020 show, across most platforms. #nature #camping #community #racialequality #family #blackfolkscamptoo
Our sweet #feralcat Moon has had a breakthrough. She's giving lovin's now and letting me pet her!!! A year ago she would run away if someone approached her. See what a year of patience and persistance can do? #toocute
Said goodbye to the old studio yesterday at close of business. Lots of work going on this weekend. Look forward to debuting the new set up. ;)
A great night of laughs at @sliceoflifecomedy with @everythingavl tonight!
This is my new fur-buddy. His curiosity is my joy. I've been getting visits for the pastcouple weeks. I hope to see him again this weekend. #love #racoons 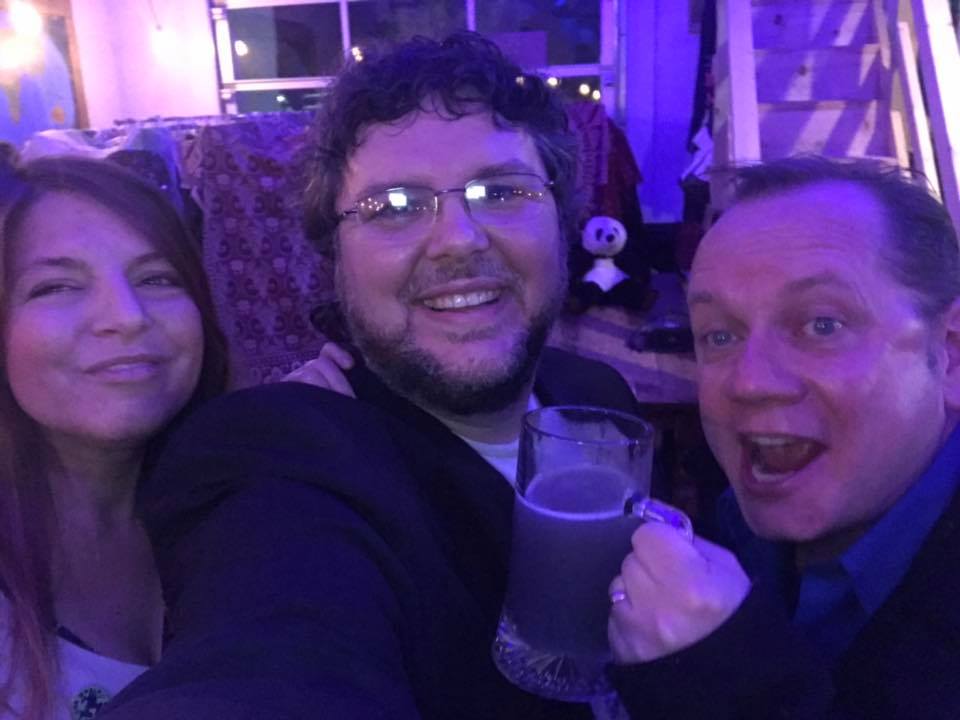